Create a new GoFormz form, assign it to a user, and optionally populate some form fields.

This action can be used to populate all form field types except Locations, Sketches and Tables. Adding Locations and Sketches is not supported at this time, and the Fill Form Table action should be used to fill a table.

Typically, forms are created based on external triggers — for example, you may want to create a new form whenever a new work order is created in Salesforce, in order to capture some data for the work order. However, you can also create a form based on a GoFormz trigger. For example, suppose the first thing you want to do after taking on a new project is a site inspection. Then you would want an approved Project Proposal form to automatically trigger the creation of a Jobsite Inspection form.

In the example below, we show the Create Form step of a common Salesforce integration workflow which is covered in detail here. In this example, when a Work Order object is created in Salesforce, it triggers the creation of a new GoFormz form, with some fields pre-populated. 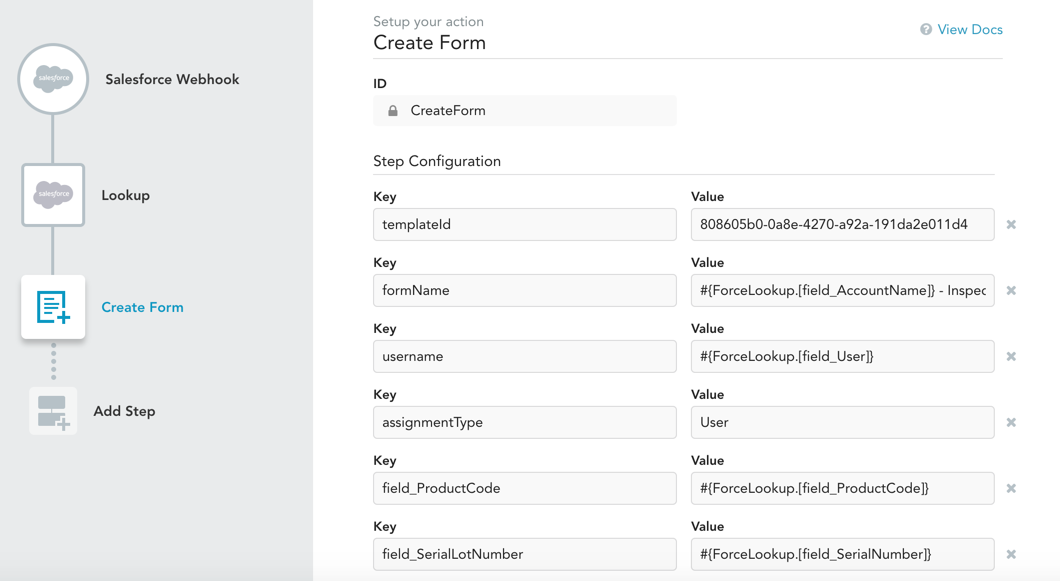 In this example, the new form's name is composed using the AccountName and WorkOrderNumber fields from Salesforce: #{ForceLookup.[field_AccountName]} - Inspection Report - #{ForceLookup.[field_WorkOrderNumber]}. The username of the form assignee is also taken from a Salesforce field. Finally, the ProductCode and SerialLotNumber fields in the newly created GoFormz form are pre-populated.

Updated over 3 years ago